44 replies to this topic

One thing I loved about the first few songs of this show is Jack kept muting his cymbals and instead of letting them go, he would fling them, causing them to fall over. It was hilarious watching the roadies circle the drum set tightening the cymbals. The roadie would fix one and go to the other and Jack would have knocked over the one he just fixed by the time he was done fixing the second. I laughed a couple times.

He's been doing the cymbal spinning thing since the spring. You can see it in a lot of videos, but it seems to be rare for him to knock them over. The poor tech guys must've had an off night

I love when Jack has his roadies do work, it's hilarious. I wish there was a video.

He was extra aggressive with his cymbals huh? lol. that would be fun to watch. poor roadies.

That is awesome, will be cool to get a couple of their shows from this tour when they are changing up the set list a little - glad to hear it was a good show and I can't wait till you get around to sticking that up, thanks a million again for sharing

flew from ireland for a couple of days to see this show, having seen them in london last october. (seriously guys, come to dublin!) absolutely incredible. i won't delve into too much detail, about ten feet from the front in the middle, much of what i thought has been echoed above. highlights in particular were no horse (surprising and fantastic opener), 60 feet tall, cut like a buffalo (a favourite of mine which didn't hit me like i wanted it to last time around, but sweet jesus wednesday's effort was superb), will there be enough water, and the simply awe-inspiring blue blood blues. can't forget tmlym too! fantastic show, great crowd (first gig stateside), epic venue, thanks to the dead weather and to boston for a truly memorable night!

PS This was my first Dead Weather show and I thought they were incredible.

Thank you, nofaithmed11 for the set list and review.

I didn't take many pics, because I was enjoying the show, fortunately I managed to get some good ones:

Great pics, Michelle! I was literally about two feet to your right!

Thanks for the pics!!

great pic of LJ thanks a million

Possibly the most accurate review I've seen yet for a DW show, from Boston.com: http://www.boston.co...house_of_blues/ Terrific pic of Ruthless, too. 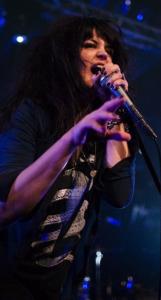 The first thing youll want to do after seeing the Dead Weather in concert is take a shower. Probably a cold one.

At least that was the impression at the bands sold-out show at the House of Blues Wednesday night, an evening of dirty and depraved junkyard rock rooted deep in the blues. The performance was so intoxicating, you couldnt avert your eyes from the stage  mainly out of fear that sinister singer Alison Mosshart might knife you while your back was turned.

The Dead Weather is made up of four musicians who first made their names in other bands. The White Stripes Jack White, who mostly plays drums in his new band, tends to get all the attention, but its truly a group effort. Dean Fertita (Queens of the Stone Age) holds court on bracing guitar and keyboards, while Jack Lawrence (the Raconteurs) gives the songs depth with his murky bass lines.

It was Mosshart, though, who nearly stole the show with her feral intensity. As part of the British duo the Kills, shes always been a hurricane, picking up choice bits from her predecessors  a pinch of Patti Smiths steeliness, some of Janis Joplins vocal ferocity, and half of Siouxsie Siouxs all-black stage attire.

On the opening No Horse, Mosshart  or Baby Ruthless, as White called her  stalked the stage as if waiting for someone who was supposed to be home two hours ago. Between her manic giggles and the blasts of blue lights, Im Mad was an unsettling bit of psychedelic blues-rock from the groups new album, Sea of Cowards.

As much as she owns the spotlight, Mosshart has met her match in the Dead Weather. White shares her affinity for the dark side, and their chemistry is the linchpin of the bands dynamic. When he stepped up as the frontman on You Just Cant Win, their bodies swayed in synch, but it was impossible to tell who was leading this dance.

Having spent most of the night behind the drum kit with a few turns on lead vocals (I Cut Like a Buffalo, Looking at the Invisible Man), White finally showcased his searing guitar prowess on Will There Be Enough Water?, a downcast duet with Mosshart that offered some fleeting respite before another round of sleaze and sludge.

After the final encore of Treat Me Like Your Mother, Whites farewell remark felt like an exorcism to cast out all the demons that the Dead Weather had just unleashed. God bless you, Boston.

Yowza, this is one of the most interesting performances of YJCW that I've seen yet. LJ plays the hell out of that bass.

Oh yeah thats a good one Kali. I forgot to post it yesterday. thats a great bass view. I actually watched Jack instead of Jack for most of that one, Ha!
now im gonna watch it a few times more. do it again LJ do it again!

Over on trading forum. Enjoy!!!

Never thought I'd see Jack White upstaged. Alison is one of a handful of people in the world who could do it. Incredible.

I do wish they'd played "I Can't Hear You", though. It would have definitely fit the energy of the night. Still, it's one of my favroites and I didn't even realize it was missing from the set until a few days later. It really was an incredible show.

I'm now sort of half-wondering if the Brooklyn concert is sold out and if I can make it there. They really need to play more NE shows. They don't get played on many stations up here, so they're like this strangely awesome semi-secret. But the other day I walked into an EMS in my concert shirt and was immediately accosted by one of the salesmen. He commented on my shirt and TDW's general magical wonderfulness, we shared a moment of silence and fought the urge to hug it out, then I asked him where the multi-day hike packs were. It was lovely.

Moral = EMS salesmen are completely unaware (and obviously perturbed) that there are shows in Boston. We need more Weather in this easterly direction!

But the other day I walked into an EMS in my concert shirt and was immediately accosted by one of the salesmen. He commented on my shirt and TDW's general magical wonderfulness, we shared a moment of silence and fought the urge to hug it out, then I asked him where the multi-day hike packs were. It was lovely.

I miss EMS, they all closed down here in the DC area.