32 replies to this topic

For those who are interested, this series starts tomorrow on ABC. Pretty much every review is saying it is Oscar worthy. Here's information about it:

They're saying it's even better than The People vs. OJ Simpson series, which itself was very good, and will likely win a ton of Emmys.

My DVR says that two-hour broadcast is "Part 1".  I don't see any other parts scheduled for the next two weeks.  Is that just because it was a five-part series that aired in half-hour chunks on ESPN, and they're simply combining it?

ETA:  I looked into it, and it's a 7.5 hour documentary.  So, on television, it'll be broken into five, two-hour parts (with commercials).  In the U.S., Part 1 is on ABC tomorrow night, and the remaining parts will air on ESPN throughout the week.  In Canada, CTV will be airing it on Saturday, Tuesday, Wednesday, Friday and Saturday, with TSN re-airing it the following days.  It did get a brief theatrical release, to qualify for Oscar consideration.  It's reputed to be the best, most artful doc ESPN has ever put together, and apparently it works brilliantly as a companion piece with The People vs. OJ.

Yup. I have baseball tickets to tomorrow night's Dbacks game and when I bought the tickets, I completely forgot this was airing tomorrow. If I had remembered, I wouldn't have bought the tickets so I could watch it live. I just have to avoid going on twitter until I can watch it. 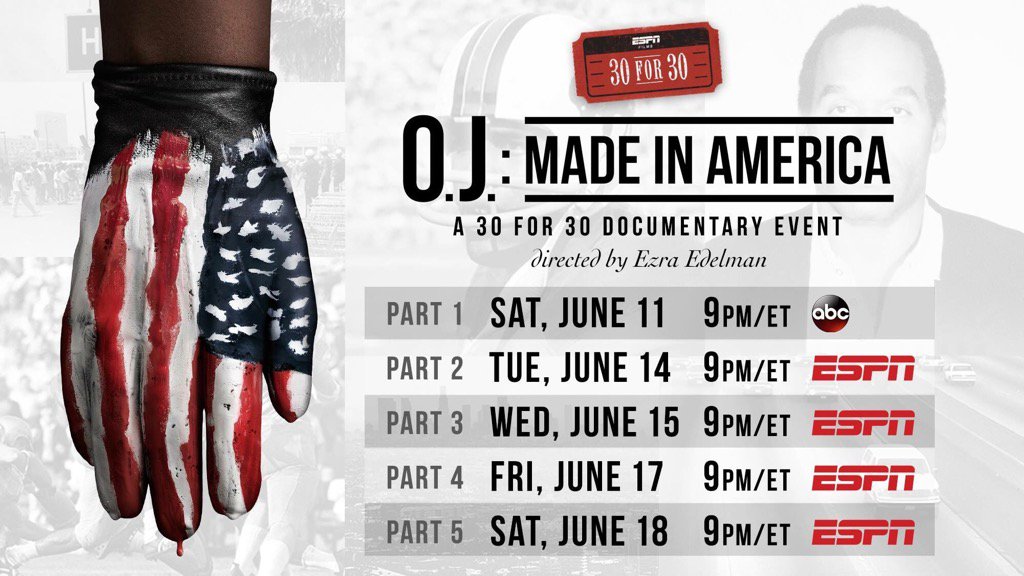 Just finished watching the first episode. That was really, really well done. Can't wait for the next one.

I'm looking forward to watching this!

^ Were you able to catch the first episode yet?

Just finished the second episode and... (putting in spoilers)

Spoiler
Oh man. That was a depressing episode. The coverage of the continued beatings, the Rodney King beating and the riots that ensued... This coverage is just too good.

For those who don't want to wait for each air date, ESPN has all five parts up now on WatchESPN. http://espn.go.com/watchespn/

Oh and here is an interview from the Washington Post with Ezra Edelman who directed this series.

Meet the man who has finally explained O.J. Simpson to the world - The Washington Post

I'm going to wait until all five parts are recorded on my DVR, then I'll (perhaps) binge-watch it.

That's a good decision. I can't do it haha. I'm at the point where I'm too hooked into it to stop and wait until they all air.

Yes Matthew, ESPN did an exceptional job with this doc. I remember all of it like it was yesterday and to this day I am appalled, disgusted and furious with the despicable spectacle of our judicial system at work. What a freak'in joke, not to mention the exuberant waste of time and money. I even left work to come home to watch the verdict with my father and we simply could not believe what we saw and heard. That was a heinous premeditated double murder with DNA evidence to prove it and the judge and jury allowed it to become a race issue. Not to mention the effect on the Goldman and Brown families and what about Nicole's kids? Oh for Christ's sake, I've got to stop while I'm ahead.

But yes, if you are one that is not familiar with the case and loves history this is a must watch. Remarkably honest job done by ESPN.

The only point I'd hold against it is the ESPN house style of zooming 1.33:1 vintage footage to fit a widescreen image, making much of the doc rather hard on the eyes, and poorly framed.  Otherwise, a very well-put-together production.

If anyone cares ESPN 2 is now airing it but for whatever reason they blacked out the pictures (in episode 4) of  Nicole and Ron's necks.

I had no idea about the zooming in of the vintage footage. That's interesting. 'O.J.: Made in America' — Charlie Rose

Even though I've grown up in LA, I had no idea of the racist history. I mean of course I knew about the Rodney King ordeal, but I never really dove into the history of it. I took a Values and Ethics class (to get the humanities class out of the way) this summer and we talked about this documentary a lot. Mostly about the ethics of the trial and the things pertaining to that. I had no idea one of the jurors was a former Black Panther. It blew my mind that he was able to be a juror. And then how they pretty much found him not guilty as payback for the racial tensions of the past. Wow. I'm going to be watching this series many more times. I got my dad to watch the series and he loved it, but when I tried getting my mom to watch it, she said she didn't want to because she lived in LA during this incident and she didn't want to "live through it again." Still trying to convince her she has to watch this haha.

If anyone cares ESPN 2 is now airing it but for whatever reason they blacked out the pictures (in episode 4) of  Nicole and Ron's necks.

Yeah, ESPN released a statement prior to the original airing of the episode explaining why they would blur out the pictures in future re-airings.

Also, when I drove home from Arizona to LA two weeks ago, I listened to this interview that Ezra Edelman, Carl Douglas, and Marcia Clark did with Charlie Rose on Charlie's show. I liked it a lot. Especially how clear Marcia was when it came to saying how she was totally against using the glove in the courtroom. 'O.J.: Made in America' — Charlie Rose

Matt, videotaped footage was pretty much always shot in 1.33:1 format.  The only way to get rid of the black bars that would appear on the side of the image (on a widescreen TV) would be to zoom it.  So, all of that courtroom footage:  zoomed.  All of that sports footage:  zoomed.  Every personal video recording:  zoomed.  When you zoom something like that, you notice the imperfections of the image more, and if the original footage was shot with a particular framing in mind, it's usually compromised.  I get why they do it -- they don't want to constantly be jumping from a ~square to rectangular image -- but it is what it is.

Ah ok. Thanks for the explanation. Makes sense and now that I think about it, I shoulda realized it haha

The Charlie Rose episode was awesome.  Thanks!!!

You're welcome! There's also a good one that the three of them did with AOL if you're interested.

Thanks Matthew!!! I'll have a look at it tonight. I love this Ezra Edelman, this guy is on this game.

I just still have a hard time wrapping my head around this. Even after all of these years, I know how, why, when blah blah blah , and I'm still simply astounded. And to listen to those jurors speak  UGH!!!!......no wonder your mother didn't want to relive it.

And why did it take a Civil Court to tie him to the shoes?

Back to Art & Media