Why doesn't this place have a soul thread?  For Christ's sake, we love Detroit music and let's face it, even if Iggy Pop and Jack White combined Voltron-style to form the second coming of Christ their influence on the world would be minuscule compared to the legacy of Motown.

Here, have some contemporary Australian soul:

T Model, you deserve your own thread.

JACKSON, Miss. — James Lewis Carter “T-Model” Ford, a hard-living blues singer who taught himself to play guitar when he was 58 years old and his fifth wife left him, died Tuesday at his home in Greenville, Miss.

His age was uncertain. Washington County Coroner Methel Johnson said the family told her Ford was born in 1924 and had already had his birthday this year, which would have made him 89. But a blues expert and longtime friend, Roger Stolle (STOH-lee), said Ford didn’t remember what year he was born and claimed to be 93.

Johnson told The Associated Press that Ford had been under hospice care and died of respiratory failure shortly after 10 a.m. CDT Tuesday. She said he was at home with several relatives, including his wife, Estella Ford.

Stolle, who owns a Clarksdale, Miss., store called Cat Head Delta Blues & Folk Art, accompanied Ford and other blues men when they toured Europe in 2009. He also traveled with Ford to gigs in New York.

“He was known as one of the last really authentic Mississippi blues men,” Stolle told AP on Tuesday. “He has a story and could back it up.”

When Ford was young, he served two years of a 10-year prison sentence for killing a man in self-defense, and he had scars on his ankles from serving on a prison chain gang, Stolle said.

Ford had six wives and 26 children, Stolle said. When Ford’s fifth wife left him, she gave him a guitar as a parting gift.

“He stayed up all night drinking white whiskey,” or moonshine, “and playing the guitar,” Stolle said. “He kind of went on from there.”

Ford started his blues career by playing at private parties and at juke joints in Greenville.

“He’d play late, then he’d spray himself with a bunch of mosquito spray and sleep in his van,” Stolle said.

“His music would take you right back to the heart and soul of the Delta, back in the day,” Luckett said.

Ford would show up for gigs early and often play longer than expected, even when he started experiencing heart problems in recent years, Stolle said. Ford would also swig Jack Daniels on stage and chat with the audience. Often, he’d pick out a happy-looking couple that included an attractive woman and would talk directly to the man.

“He’d say, ‘You’d better put your stamp on her because if she flags my train, I’m going to let her ride,’” Stolle said. “He’d do it with a gleam in his eye and a smile. He could get away with a lot.”

It seems like every six months or so there's a new "Top 100/500/1000/ albums of all time" list published.  They're great fun to read although they can be a little predictable.  Revolver, Pet Sounds, OK Computer.... yadda yadda. Kinda boring. 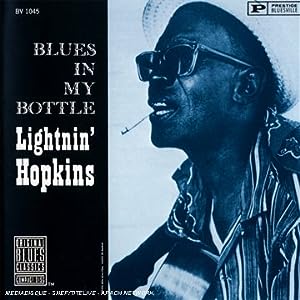 The first full lenght album by Lightnin' I ever bought.  He sings about his grandad, about being scared to fly.  He adapts old songs and invents new ones on the spot (often doing both at once).  He was doing this for the folk crowd rather than his Houston regulars but he didn't really change anything expect the guitar.  Lightnin' was genuine cool and this album is proof.

The album where Neubauten add melodies and song structure, alienating their hardcore fans, but are still too goddam noisy for the mainstream.  German art pretentiousness at its finest.  Some of the lyrical themes get a little over the top (I get it Anita, you're a FLOWER!) but it's the music that grabs you.  You don't know if you're supposed to dance, sit and contemplate or smash things.  Probably all at once.

This is going to sound kind of daft but I'd really, really like to see a picture of the carry case next to something so that I can get some sense of its size.  You know, a picture of it next to a record player, or of someone holding it or something.  I need a sense of scale.  For some reason I can find absolutely no pictures of this sort on the entire internet.

I'm like *this close* to ordering one because I think it's the right size for what I need but I want to be sure, y'know.

Help me out here people.  Take a picture of yourself holding your record case.  And no trick photos!  No pictures of midgets or giants holding the cases and giving me the wrong sense of scale  That'd be just plain mean.